Eugowra, a plan forms, and a New Year begins!

It's been way too long since putting pen to paper, or to keyboard about thoughts and plans for my home layout. The last two years  or so have been challenging, health wise for H. All appears good now, but it has been a real challenge, and does change your outlook on... everything.

So modelling is a pastime that deals well with breaks, pauses, what ever you want to call them. So here I am recharged and ready to make some progress. If we all roll with our hobby a bit more, do it when it feels right, and don't when your hearts not in it. Then it will be enjoyable. It should always be enjoyable what ever you do.

So then some modelling plans for the year. The list in no particular order would include the following:
Toowoomba Show, can't wait for this one after missing last year. I'm heading down to Sydney again this year for a third 'modelling the railways of NSW' convention. The Early Days convention is a must do after attending for the first time last year. Then there's the RMCQ show as well. Oh! Another new one for me, well the second one actually, is the Coffs Harbour 'Branchline Modellers forum'. I loved it last year, what a great group of Modellers!

This is just the major ones, there will be plenty of others with modelling nights, Tuesday nighters, and running sessions at different layouts. What a great year ahead!

I've been interested in the Early Days period for a while now. My attendance at last years convention really cemented my modelling focus in this time period. I'm not close minded to other times, but this one does pique my interest. Having a more certain time period does also refocus your kit buying also. A real advantage rather than just randomly purchasing kits etc, that you like the look of. I did attend the New England convention last year, and did source some new kits from Peter Boorman's workshop. Truly Peter has done some beautiful work, and they are Early Days kits also, what a bonus!

The area I have available for modelling is not ideal. It is open to the outside so dust is an issue. I live in Brisbane so temperature, and more importantly humidity is an issue. The space is an enclosed double garage, that I have use of half of. I've discussed all this in previous posts so I won't go over it again.

The plan for the layout has stayed the same. What has changed is the order of construction. My current layout 'Splitters Swamp Creek' is almost at the end of its run. What I mean is that my interest in it is waning. Time for some new modelling challenges I think. It has been such a long time since I started building it. The time between modelling efforts has made the whole thing a really long term build, and it's only small!

It has helped me plan a little better for the next one. I plan to build it in stages that when fitted together with some linking areas will create a whole home layout. It will enable me to exhibit different parts of the layout at different times, so that should keep things fresh from a general public perspective. As I said though, I live in Brisbane and the number of shows I attend is pretty light.

The first part I intend to build is the Tenterfield Stockyards. It will be two modules of about 2metres each, at this stage. 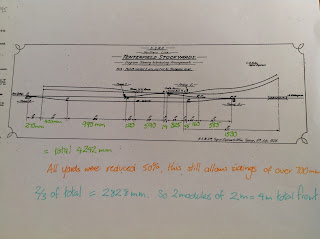 I've had a bit of a play with the plan as you can see, with some scaled down sizing for the sidings. What no Station? nope, not this time. I plan to run the rollingstock and train consists from early on not long after opening. there will be a fair amount of detail able to be built into it though with a ballasted deck trestle bridge located right beside the area I plan to model. 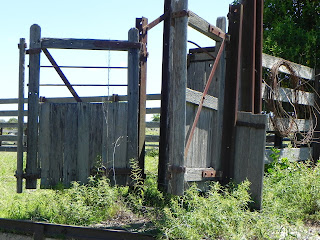 It does open up a can of worms though, of things to take into account, like, what ran and when? what type of rollingstock was used? What information do i need to source and from where? Remember it was a different time back in the 1920's or so. Rollingstock was completely different to the RTR that we see everywhere now. What locomotives ran? can I obtain them in HO? Who has a ballasted deck plan that is what was built at this location? How long have I got to build this? Will I hand lay the trackwork? What code rail? How will the modules fit into the home layout? 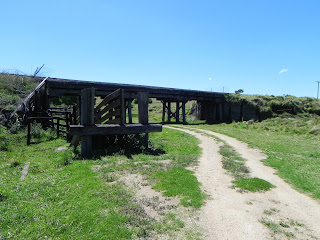 A fair amount still to consider, and still a bench full of kits half built to clear up first. Theres a local buy and sell in a couple of weeks so I'll be there clearing some gear out to help me move towards this next step.

I'm looking forward to a productive year, a simple plan in mind, enjoy my hobby. I hope to catch up with you at some stage this year!
Have a great week!
Oorroo!
Geoff.
Posted by Geoff at 3:57 AM